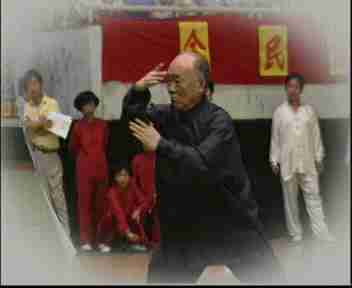 It is a little known fact that the legendary Founder of Kyokushin Karate, Sosai (Grandmaster) Oyama admitted to only one single defeat in his entire life as a Karateka. The man is whom the martial arts world call the “God Hand” or the “God of Karate”. He is a man who easily sliced through bottle-necks, broke rocks with his knife hand, killled bulls with a single blow, defeated hundereds of martial art masters & professional fighters, boxers, wrestlers all over Japan & the whole world. Yet in his biography this invincible Karateka revealed that he could not beat one frail old man – an old man who practices “Taijiquan”, the art of the Grand Ultimates.

According to his own narration, after he defeated the formidable Muaythai figher “Black Cobra” in Thailand, he travelled to Hong Kong to meet a certain Mr Chen, a man rumoured to be a great Taiji master. He knew in his heart that Chinese Martial Science is the source of all Karate, & he regarded this trip as a return to the source, his challenge to the fountain-head. His first impression of Mr Chen was quite bad. As it turned out, Mr Chen was a frail old man who looked more suitable for an old folks home rather than teaching the famous chinese martial art there. After the usual pleasantries, Oyama asked to leave, thinking that this old man would never accept his challenge to Taiji. But to his amazement, Mr Chen took the initiative & asked Oyama to spar with him. Seeing doubt in his eyes, Mr Chen said,”Are you not here to find out what is Taiji? Here is your chance.” So Oyama accepted, thinking that he could finish off this old man soon enough. But he was very wrong.

The long duel that followed was like a classic battle between the snake & the crane. Mr Chen was able to neutralize all the Karate attacks he could deliver, using smooth circular, arc-like movement & techniques. On the other hand, when Mr Chen counter-attacked, it was with a force that could not have come from a man his age. It was all Oyama could do to evade them, using linear, sometimes awkward movements. Eventually, seeing no sign of fatigue in the old man, & having exhausted all his techniques, Oyama gave up, admitting that he could not beat Mr Chen. Mr Chen laughed & thanked Oyama for giving him such a great workout, inviting him to stay for a few days to learn more. Oyama asked to be left alone for a short while to contemplate this defeat. Later, when one of Mr Chen’s students came to invite him for tea, he was quite surprised to see tears rolling down Oyama’s cheeks. In his own words, Oyama said,”These tears are not tears shed for losing; they are tears of appreciation. Appreciation that my Karate still has an infinite amount of space to grow. It is a space that is opened up by none other than the chinese martial art called Taiji”.

After that he stayed with Mr Chen for a period, learning the principles of Taiji. Being the genius that he is, he managed to grasp them quickly, & was able to defeat Mr Chen’s most senior student at the end of this period of study. From then on, after his return to Japan, Kyokushin Karate was known to reveal a certain Taiji flavour in its form & techniques. After his passing in 1994, however, these Taiji principles were lost in Kyokushin. The student who was able to learn them the most was Ashihara, one of his most gifted students. But due to some problems he left Kyokushin to form his own “Fighting Karate” in 1980. Ashihara died earlier than Oyama by 2 years. The only person left now who still uses these Taiji principles in his Karate is Ninomiya, who also left Kyokushin to form his own style, known as “Enshin Karate”, the Heart of the Circle. It is better known as “Sabaki”. Ninomiya learned under both Oyama & Ashihara. He is currently teaching in the United States & organises the Sabaki Challenge yearly.

Another famous Shotokan Karate master, who is also dead now, once remarked to his student that,”Taiji is a very powerful art, but it is an art for superhumans. For us ordinary humans it is better to stick to Karate.” This is said after he witnessed a Taiji master shake an entire wooden house with deceivingly light palm strikes to one of its pillars. But let us come back to the subject of Taijiquan. I’m sure all of us have heard legends & myths of certain Taiji masters winning effortlessly against challengers of other styles, or performing superhuman feats using internal power – Chi. How many of those stories are true? It is hard to tell, surely. The art of Taiji is a paradox for Chinese Martial Science. Afterall, it is something invented by an Immortal (Zhang Sanfeng).. if the legend is true, that is. But even if it is false, there are still millions of people around the world practicing the 5 main styles of Taiji, & the so-called masters also number thousands. Out of these millions how many can actually attain the efficiency level of Mr Chen? Perhaps only 1 in 10000 can. The rest of the 9999 probably can’t use Taiji to defend themselves even if their lives depended on it. Thus there’s a saying in Taiji,”Practicioners of Taiji can’t step out of the house for less than 10 years.” My Baji Grandmaster, Liu Yunqiao also once remarked that, “In Baji, either you are a General of men or you are nothing at all.” While I’m no General of men, I believe this is even more so for the millions practicing Taijiquan. That is not to say that Taiji is inefficient, but rather, it is so profound a martial art that it is only useful in the hands of a rare few. Maybe true Taiji is almost dead today. Compared to Muaythai, Karate, or even Sanda, in which 8 out of 10 practicioners will be able to fight in a short time, I think Taiji is something which is more suitable for the museum. That is true when refering to Taiji as a martial science, not as a health exercise for old folks. The reader may disagree, but then you must ask yourself: What am I learning Taiji for? If it is for practical purposes then you must again ask: Am I one of those superhumans? If so, good luck in your Taiji path, but if not, it is wiser to just give it up & go for something direct & simple, which will certainly lead you closer to the truth behind Chinese Martial Science.

The document is from Internet sources.