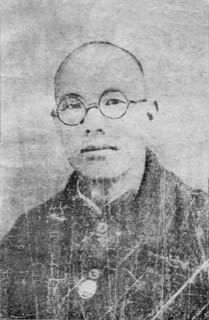 April 8th, 1993 was the 100 year anniversary of my father, Chen Zhao-pel’s birtn. Looking back on his life, the events remain fresh in my mind; his superb martial arts skill, his ardent love for his country, his noble martial art ethics, and his spirit of tireless teaching, all come clearly into view.

My father, the honorable Zhao Pei (April 8, 1883 – December 30, 1972), called himself Ji Fu and was an eighteenth generation descendant of the Chen family at Chenjiagou in Wen County, Henan Province. Following the family tradition, in his youth he learned the Taijiquan handed down in his family for generations, from his father, Chen Deng-ke (17th generation). He then continued his studies with Chen Yan Xi (16th generation] and Chen Fa Ke (17th generation). Later, he also studied Taijiquan theory under Chen Pin San (16th generation). When my father was young, he practiced Taijiquan exceptionally hard, practicing thirty sets a day regardless of cold or hot weather, every day without letting up.

At age 21, my father left Chenjiagou and travelled to Gansu Province and Hebei Province where he taught Taijiquan. After seven years he returned home to the village, taking a position as a coach for the Wen County Martial Arts Society. In 1928, he was invited to Beijing to teach Taijiquan by the head of the Tong Ren Tang Pharmacy, Yue You-shen. Chen Zhao Pei taught in Beijing at the City Hall, Chaoyang University, and Yuwen University. He taught Taijiquan at altogether seventeen different organizations that had invited him to coach the members. In 1930, at the invitation of the Mayor of Nanjing, he went to Nanjing to teach at the City Hall, the Overseas Chinese Association, and at the National Power-Supply Industry Association. He concurrently served as an honorary coach of the Central Martial Arts Institute. In 1942, he went to Xian, Shaanxi Province, to teach at the Yellow River Hydro-Power Electric Agency by the invitation of its chairman, Zhang Han Ying. After the war with Japan was won, he accompanied the agency to Kaifeng, Henan Province when it moved there in 1946, and taught there. In 1948, after Kaifeng was liberated, my father was already 55 years old and his drive to teach Taij iquan was even greater than before. He managed to both work at a regular job and teach.

In 1958, when he retired, he returned home to Chenjiagou to teach. In March of that year, he participated in the Henan Province Martial Arts Meet and took first place in Taijiquan. In 1964 he attended the National Martial Arts Meet where he was selected as a “Famous Taijiquan Expert”, and in 1964 was selected as a member of the National Wushu Association.

My father’s study and knowledge (of Taijiquan) was vast, as was his attainment in (understanding its) theory. Among his written works are the titles “Chenshi Taijiquan Hui Zong” (Compendium of Chenstyle Taijiquan) (published 1935), “Taijiquan Ru Men” (Introductory Taijiquan) [published 1935), “Chenshi Taijiquan Tu Jie” (Illustrated Chenstyle Taijiquan) (this title is probably in error – it should read “Taijiquan Yin Meng” which was published in 1962, unless it is identical with “Chenshi Taijiquan Ru Men Tujie” (Taiwanese edition of a 1935 book)), and “Chenshi Taijiquan Li1un Shisan Pian” (Thirteen Chapters on Taijiquan Theory) (unpublished manuscript that was completed in 1972). They elucidated Taijiquan’ s original principles and explained its profound aspects in easy to understand language. His writing, which ran to a few million words and a great many chapters, is rich in content. This is rare in history and has made an outstanding contribution to the development and expansion of Chensty1e Taijiquan.

My father spent his whole life propagating Taijiquan. In 1958, when he retired, he was already 65 years old. I was the deputy director of the finance department of Zhengzhou Hydro-Power Bureau’s Yellow River Hydro-Power Council. I asked him on three occasions to come to Zhengzhou and stay with me, but, he regretfully declined three times; he was resolute in his determination to return to Chenjiagou and take up residence there. This was because he was aware that the numbers of people practicing Taijiquan was getting fewer and fewer, and, he was concerned that there would be no one to carry Chenstyle Taijiquan on into the next generation. He willingly returned to the spartan village life of Chenjiagou.

After he returned to the village, he set up a Taijiquan school in his own home, bearing all of the costs himself. At the same time, he also set up a training class in the county town, Wenxian, teaching the members of the government, the workers and staff of the Mining School, and coaching the teachers and students. There was a vigorous renaissance of Taijiquan in old Wenxian. Who knew that this good scene would not last for long. During the Cultural Revolution my father was persecuted and subjected to public “struggle sessions”, but during the still of night, Chen Zheng-lei and several other of his prized disciples secretly went to study under him. On those occasions, my mother prepared tea for them to drink and food to eat, supporting them with all her strength. My father, demonstrating that he was not afraid of the persecution, bravely carried on with his teaching of Taijiquan. He composed a verse that goes: “At eighty years I teach Taiji, “‘without concern for whether the road ahead is bad or good, [though) the wind howls the rain beats down and the difficulties are many, I delight in seeing the next generation of successors filling my home village. “

In September of 1972, after my father had finished participating in the Henan Provincial Wushu Meet, he stayed on in Zhengzhou for twenty or so days. After Taijiquan enthusiasts heard this news, they came one after the other to request that he teach them the methods of Taijiquan. On the whole, my father was full of spirit and taught enthusiastically without holding anything back. He gave demonstrations of the movements of Taij iquan all day without taking a break. At the time, when I beheld this scene I felt uneasy about it. I was afraid that he would become over-exhausted and that there would be a mishap. I tried many times to dissuade him but it was of no avail; his enthusiasm was greater than anything. He said, “In the past several years I have suffered enough from attacks and persecution in order to teach. I was only able to teach secretly. Now that the government is encouraging-it and there are this many people ardently studying it; how excellent is this opportunity, how could I shirk it and not teach? “

After this, he had not returned to Chenjiagou for very long when he was admitted to the county hospital with hepatitis, but he quickly recovered and was discharged. When he left the hospital, the doctor exhorted him over and over, “At your age, when you leave the hospital you must definitely pay attention to taking it easy, for the time being you should not teach. If the hepatitis recurs, there won’t be much we can do for you.” How could my father stop himself from teaching? He continued teaching around the clock until finally, on December 27, 1972, his hepatitis flared up and he was re-admitted to the county hospital. He passed away on December 30th, 1972 at the age of eighty. There wasn’t anyone who was not extremely grief-stricken upon hearing of his passing!

My father taught the art of Taijiquan over the course of his entire life, not seeking fame or profit. In 1928, he went to Beijing and was the first to teach Chenstyle Taijiquan there. This brought out the essence of Chenstyle Taijiquan which became known to society at large, and it clarified the controversy surrounding the origin of Taijiquan. After he returned to his home village in his later years, under extremely difficult conditions, he cultivated a new generation. The present day “Taiji Jingang” (four outstanding exponents) who are famous in China and abroad, Chen Zheng Lei, Chen Xiao Wang, Zhu Tian Cai, and Wang Xi An, all came out of this period. The resurgence of the declining Chenstyle Taijiquan came from this one period. Chen Zhao-pei deserves to be called a great master in the history or the development of Chenstyle Taijiquan, serving as a link between its past and its future.