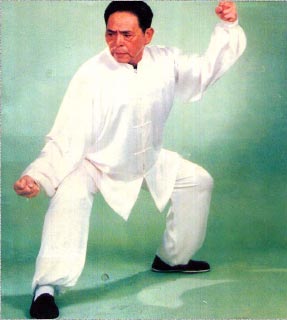 Interview with Feng Zhiqiang, head of the 18th generation of authentic Taijiquan, original source of all Taijiquan styles of the Chen-family. Compiled by Luc Theler during many talks in Beijing, China. This interview is a part of the soon edited book about Taijiquan by the same author.

L: Feng Zhiqiang, you have walked a long path to become grandmaster of the original school of Taijiquan. How did this path of life look to you?

F: During my childhood most people in China were forced to fight for their survival. One had to work hard to have some food. It wasn’t any different in my family. Thus I had to work, ever since I was ten years old, carrying trolleys and carts etc. Like most kids in my age, I got busy with martial arts from my early age onwards. Dongbeiquan, the art that crosses your back, to me was an exciting fighting style, which I wanted to continue, but it all happened different in the end. I intensively studied Liuhe Xinggyiquan, the art of gaining form through the visualisation of the six sources. Hu Yaozhen, my master, was a great taoist medician and martial arts master. He intensively was occupied with the inner taoist alchemy (neidan) and also has been a master of acupuncture. His accomplishments are nearly undescribable, but this man was searching for the essence of all being and achieved great mastery. It was him who convinced me to study with his friend Chen Fake, along with his family style of the old Taijiquan (T.) of the Chen. Chen Fake was a man, who hardly spoke. He mostly occupied himself with the perfection of his legendary martial art. He was not really interested in teaching apprentices, since it was difficult to find suitable apprentices. In those years, one had to be patient for years before a master would start taking notice of you.

L: I have heard that nobody dared to study T. with Chen Fake, because people were lacking the patience to do so, and also because they were too frightened to receive one of the masters “electric pushes” and get wiped out.

F: That’s right. My master has been a very special person. He never was really content with his achievements. He continously was looking further into the sources of T. Often he stood for hours on end in the same position and moved up and down in the silk-thread spiral (Chansiijng), which was his way of meditation. The first path (Yilu) and the second path (Erlu-Paochui) he often practised thirty times each day, a sequence of which takes half an hour. It is indeed like you mentioned that students were afraid to practise Tuishou (Pushing Hands) with the master. The subtile actions of the master were so forceful that one could definitely get wiped out easily or even be hurt.

L: It is said that you are the only one who dared to put up with such cumbersome endeavors and in the end have been the only chosen apprentice who received the knowledge of this ancient art and became Chen Fake’s succesor.

F:It takes many years to have established all the basic techniques within your own being to even be able to take in such knowledge. Next to my work in the factory and raising a family of five I often practised every morning at five o’clock for a few hours.

L: During these times under the national socialists and later on the red brigade one had to keep such knowlege secret, right?

F: Yes, that’s right. We met secretly. Hu Yaozhen, my first master has been a vegetarian and that already was quite suspicious,- it was good luck he hadn’t been deported.

L: How would you describe in short the original old Taijiquan (T) school?

F: T. is a very ancient school of Life, which developped out of Tao and is very effective in keeping the body alive and healthy,- it supports spiritual growth and serves as self-defense.

L: Many people talk about the Feng-style T.,- what do you personally think about that?

F:This movement has started in Shanghai when I was teaching there at university many years ago, and in the meantime has become known all over China, Japan and in the USA. I personally don’t approve of it. Under all means, I am in relation to the line of my master Chen Fake, who has passed on to me the power of the 17th generation to use in the 18th generation. We practise the Chen-style, the oldest historically recorded T. Furthermore the alchemy of T. got deepened through the friendship of two great men, my two masters Hu Yaozhen and Chen Fake. In the fifties they founded a martial arts research society. The Taijiquan wasn’t changed, but the alchemy got deepened and corrected. Hu and Chen both had immense knowledge and enormous talents. Their combined knowledge lead to the fact that the T. of the original school returned to it’s proper alchemy and dynamics. As I have mentioned, nothing got added or extracted on a physical level,- we are talking about the T. of our ancestor named Chen Changxin, the grand-father of my master Chen Fake.

L: The essence of the combined efforts of Chen Fake and Hu Yaozhen flowed into the body of the chosen apprentice Feng Zhiqqian, who in return dictates history as worldknown grandmaster of Taijiiquan and Qigong.
F: is choking and laughing …

L: The term Hunyuan Taijiquan and Hunyuan Qigong more and more becomes the definition of your art. How did that develop?

F: As you have just been noticing, more and more people talked about the Feng-style Taijiquan, which doesn’t really fit, because we represent the original school of the Chen-family. Besides,- every day new “styles” of T. get created, which is a weird and strange phenomena. Whoever gains real mastery (Gongfu) doesn’t need such outer forms of style. Although one has to say that an inner evolution has been created in our authentic T. through the combined research of Hu Yaozhen and Chen Fake. The person who practices T. should move as naturally as possible, only then one can talk about Taiji and only then it is the real Taiji, since Taiji stands for the creative forces within nature and the cosmos.
When practicing Taiji, it is meant to co-relate with such a creative natural cycle. Whenever these forces are reached, they will direct an inner movement, which then again will direct the outer form. Such a creative force or power is Hunyuan. Hunyuan refers to the untaming and spiralling, cyclical force that enables and moves all life processes. Real T. is therefore not an “acted out” T.,- it is only good, when the dynamics of the spiralling Qi is felt,- then it also becomes visible throught its expressions of smoothness and elegance. The Hunyan must grow. We have to seek it and nourish it. During practice you can realize it more and more. T. is meant to be alive and to be develloped as a natural principle.

L: All around the world you have the recognition of being the only master who uses T. (whilst fighting) in a well accomplished manner. Indeed you make people fly a few yards through the air by invisible yet small contractions of parts of your body. I know the secret. What can you say about that phenomena to everyone else?

F: The answer is nearly the same, but you know the answer through your experience: knowledge and steady practice! People often want to experience a show, but are not able to recognize what truly is behind that one,- namely the cultivation of Life.

L. Not so long ago you have talked about various principles of using energy forces of power, as you have never before mentioned in such co-relation.

F: You mean the different levels (spheres) of receiving impulses of energy. We do have the capacity to transfer energies in a physical form through our bodies, in which predominantly physical laws are being used. The impulse for doing so always stems from Yi, our spiritual potential, and from our potential to visualize and concentrate, as well as from our will. We also can move matter,- and this is what happens in Hunyan Qigong and Taijiquan, through using etheric levels. If we manage to achieve the potential of letting Qi flow through our body in unbroken waves, in order so that we may project it outside of us, then we already have effect upon a directional level of nature and are able to influence matter without using up our own energy. That, as you know is very effective. The third level is Shen, the souls potential. This has effect on all levels (spheres) and also meets up with our dream level. Look, when you’re trying to push me away, I can break your center by changing your stand and center of gravitation through physical laws, thus you will be thrown out of your center. This is Li, intelligent use of power (energy). You are mastering the level of Qi quite well as you are projecting the more subtle light-energies around your body and thuswith are changing the center of gravitation of your opponent. By doing so you will not have a deficieny in energy as happens in the use of the first (the physical level). As your potential is growing to use Shen, you will be able to influence things on a more causal level – the finest and subtlest sphere. We can practise this in Tuishou (pushing hands). You can accomplish the same action with a maximum usage of either physical, energetical or soullike nature. This is a process of maturity, which lasts a whole lifetime. Now in my old age, I occupy myself a lot with it.

L: Recently you have mentioned that you have estinguished animals and demons with your sword-hand (Pointer- and middle finger) whilest dreaming. This would be Shen Gong.

L: Let‘s return to your life-story. A change of direction happened around the age of fifty?

F: Yes. In the factory, where I worked, a very heavy machine (weighing about 350 kg) was hanging down a lever, under which happened to stand a worker. He didn’t notice that the mashine was about to fall down. I managed to run there, push him away,- and then somewhat succeeded in catching the machine and lowering it to the ground.

L: Upon this action you became famous over night, got celebrated as a hero and didn’t have to be secretive anymore about being a master.

L: What is the biggest priority in practicing Taijiquan?

F: Continuity. It is of utmost importance that we integrate practising into our daily lifes, so that we may enlargen flexibility and dynamics through Hunyuan steadily. It is like painting a picture into space. If we paint the picture into space only once in a while, its colours fade and we will only vaguely remember how it looked like. If we continously continue painting our piece of art, it will become more and more magnificent and gain substance. Besides, it is very important for the body that the flexibility of the joints and “washing of the bones” is a continous process. If we enlargen the flexibility of the joints through spiraling movements and disinterupt that process often through not having repeated practice and training, we will suffer unhealthy consequences, because a larger space of movement also needs to be nourished. This is the same with everything else. The more we know, the more we have to take care about how to handle that knowledge.